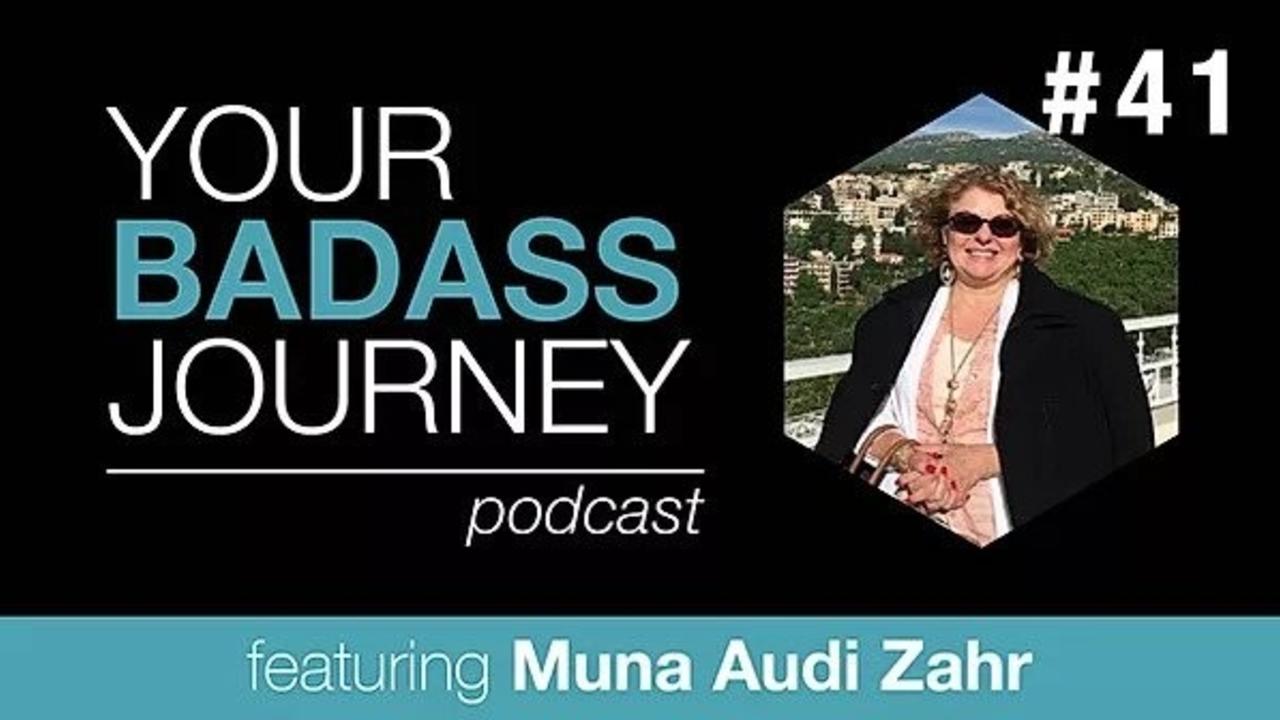 Today, I have an extra special guest: the OG of badassery, my mom, Muna Audi Zahr!

This is a very fun interview for me because you'll get to see some insight about just how close this apple fell from the tree – and into how friggin’ awesome my mom is! If any of you have had the pleasure of reading my book, Be a Badass: Six Tools to Uplevel Your Life, I do share some of my journey; lessons my mother taught me, mindset shifts that I went through as a result of being raised by my mom, and how she has impacted and shaped my world. But, today, I truly want to shine a light on the relationship we have and share it with all of you.

One of the things I love about our conversation is that we talk about being the CEO of the household, and how important it is to recognize what it really means to be a mom, and in her case, a single mom of three very strong women, while also making sure you take care of yourself along the way.

My mother was born on the precipice of war, and when she was just 40 days old, their town came under bombardment as the State of Israel was created. They left Palestine peacefully, taking refuge in a school in Lebanon.

It was there that my mother saw the true value of education.

They were a family of seven, and her parents didn’t have a lot of material things to offer their children. But what they did have to offer was this advice: "Your education is your investment in you. They can take your home away, they can take take your land away, but what you invest in yourselves, no one can take away, and that will give you the strength, the resilience to survive in this world."

To give you some context, when my mother was in sixth grade, there were 42 girls in her school. By the time they graduated in 12th grade, there were only 13 girls because the rest were married off – and that’s pretty much what people expected of young women after they learned to read and write.

Muna, however, was very determined. Although her parents wanted her to stay home and be a teacher or a secretary, she went against their wishes. “I was like a grain of sand going against the current, trying to get my higher education.”

At first, my mother did not want to come to the United States. She had my community in Lebanon, they were living comfortably in a beautiful apartment, and they were expecting baby me. She really did not want to uproot that because she was uprooted as an infant, and it took her over 10 years to start to feel like she belonged in a community.

However, she was married at the time, and her husband’s company saw a lucrative opportunity to send them both to America, get them both educated, and then establish an American subsidiary of the company. She took a trip to New York City, but she came back unconvinced.

Then, she was offered the opportunity to write a contract, and to put in it everything and anything that would give her that safety and security that she was looking for. So, she threw in everything and the kitchen sink, giving the ultimatum that it was all or nothing: a Rolls Royce, a housekeeper, a car, a driver, a fully-furnished home, vacations back to the country, all the medical insurance expenses, and a specific net income. “So, I tried to do the impossible, being educated and knowing what the American system is. They signed the dotted lines. And to me, like I had no other excuses but to pack my bags and come to the United States.”

They entered the United States on February 14, 1975, and I was born two months later, on April 30th. On that day, she called my grandmother to tell her that I was born, and they were in shelters because there was an assassination of a Member of Parliament – the civil war Lebanon had begun. “So, in one way, if I had stayed, we would have been in the middle of a 15-year war.”

CEO of the Household

As a single mom, it's the value you bring into your household that makes your household successful – and that’s why my mom always said she was the CEO of the household, running it like a corporation. This is such an important role, I’ve come to learn, but it's also under appreciated most of the time.

“One of the things that has sustained me, kept me with my head up high in any environment I was in, is my commitment to the institution that brings, and nurtures, and supports the future generation of our lives. If you want your legacy to continue after you are gone, invest in your children, invest in your home, invest in your relationships.”

At the same time, my mother never forgot to invest in herself, too. “My kids, I knew, will leave me one day, and I needed to be prepared. So, I kept my skill set being sharpened even when I was at home with the kids.

I think this is important, so I want to take this opportunity to encourage all of you CEOs of the home. Sooner than you think, you will be moved from CEO to advisory board, when your children move out or go to college. And once you are on the advisory board, you will become a CEO of some business or passion of your own that you can make into a business – and “that transition becomes much easier if you don't forget yourself.”

Read: Be a Badass: Six Tools to Uplevel Your Life