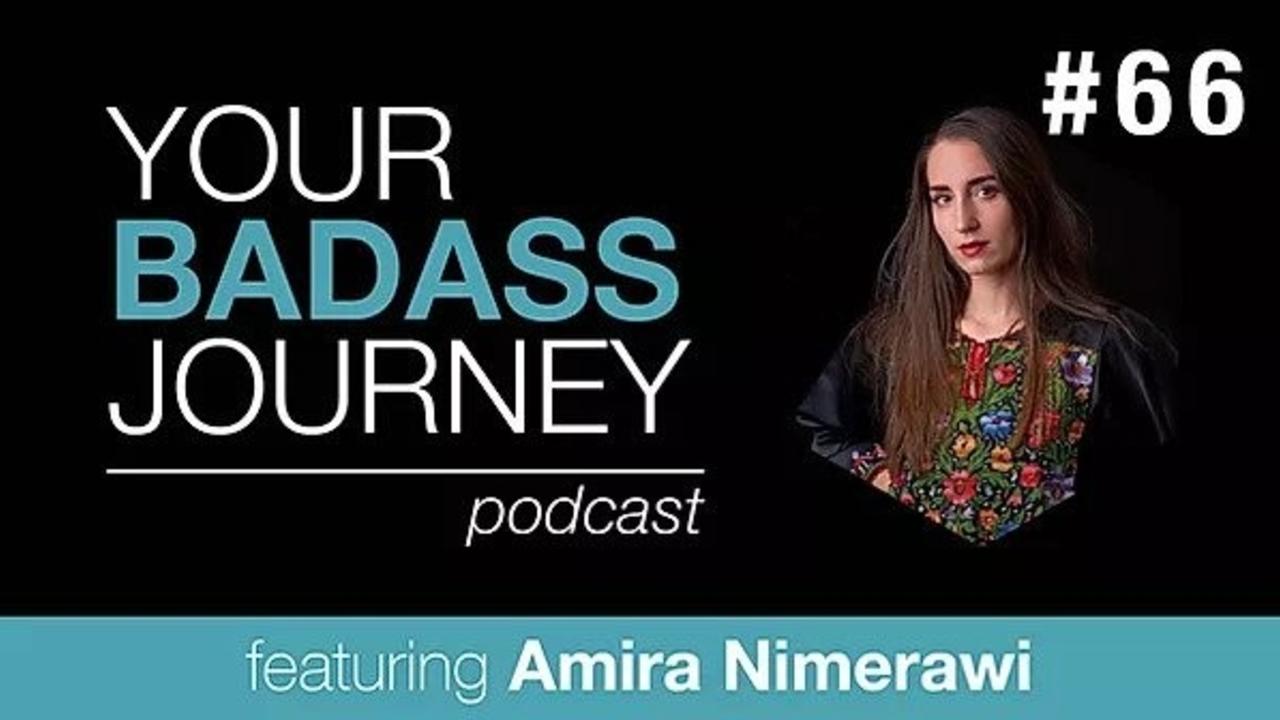 When I met Amira Nimerawi, I was just so impressed with her mission, her business, and the light and energy that she carries herself with every day. And I am so passionate about sharing her with you because my guest has actually figured out a way to create a social impact entrepreneurial e-commerce business that supports Palestinian women.

You are likely familiar with a company like Tom's Shoes, a company that donates a pair of shoes for each pair purchased. This is similar in that when you buy a pair of shoes from Ballare, about 50% of the earnings go to help girls in Palestine get educated.

Whether it is developing this company, designing the shoe, finding the manufacturer, making sure it supports the right NGO, or making sure the money is going back to a place where she and her family came from, it's just beautiful to see this journey and this give-back in action.

I know you're going to benefit from hearing how you actually go about creating an impact-based business. Beyond that, I think you're going to love the actual product. The shoes are amazing, Italian-made, high-quality, and so worth the investment. And, of course, you're also impacting girls in a less fortunate situation get the education they need, creating a ripple effect in their society. That is so worthwhile.

Amira’s parents, one a Palestenian refugee, taught her to put a premium on education from an early age – so her journey to starting this business really started at a very young age.

And living in Australia, Amira was able to benefit from a heavily subsidized education, which she took full advantage of but never took for granted. “I was always aware of those less fortunate and, in particular, those that were back in Palestine, because most of my family on my father's side are still over there, and was really aware of the reality and the daily struggles that they face themselves and within the community.”

So Amira never doubted that she would give back, but she actually started in healthcare space. She became a nurse but, eventually, took a detour working in finance, in the insurance industry, where she used that medical knowledge and started to learn about how you can combine that with a business. This was her way to learn how to eventually start or run an NGO.

But Amira learned that you can get sucked into the corporate world. “Well, I did, and was enjoying the journey on that particular path, but forgot about my initial plans of having an NGO.

“I guess you could say who I was as a person, from the inside, and all the things that I sought for were starting to be washed away by my exposure in the corporate world. And I was starting to realize that my passion for that space was waning, and I really was being drawn to helping people in a much more tangible way.” But she was fortunate enough to have mentors in the space that really nurtured that instinct.

The Fresh Princess of Ballare

The idea for Ballare came to Amira in the back of a little tuk-tuk in Mumbai. All of a sudden, the idea  hit her: Ballet flats. She was always talking to her colleagues about how they can never find the right ballet flats, and she was personally sick of spending money on things that just weren't hitting the mark. At the same time, she saw room in the fashion industry to create a product that was ethical, sustainable, and mission-based.

Amira was also really passionate about the girl effect, or the domino effect that happens when you educate young girls. The longer that young girls can stay at school, the more positive the impact that that not only on her life but within her family and within her community. It’s such a simple thing with an incredible power to break the cycle of poverty.

Then, when she was actually visting Palestine about two years ago, she was doing some research; sitting down with NGOs that were working in the area, sitting down with specific schools, and visiting refugee camps. And while she was there, the summer holidays ended and the students started to go back to school. But in those first few weeks, some of the schools were actually being bulldozed, and the kids weren’t able to go to school. But they were still turning up, ready to go to school, wherever that was. “They just picked up chairs and tables, just put them together, and they just were having classes outside, whether it was at some sort of community hall or someone's house. They were figuring out ways to continue that.”

Since Amira started her partnership with the United Nations Relief and Works Agency (UNRWA) one year ago, they’ve been able to put 25 girls through school for a year. On top of that, they organized a charity event called A Piece of Palestine that raised enough to put about 200 kids through counselling for a year.

I just absolutely love it, and this work is so needed. You can buy a pair of these fantastic shoes at ballare-co.com, or you can donate directly to the UNRWA at donate.unrwa.org/landing-page/~my-donation.