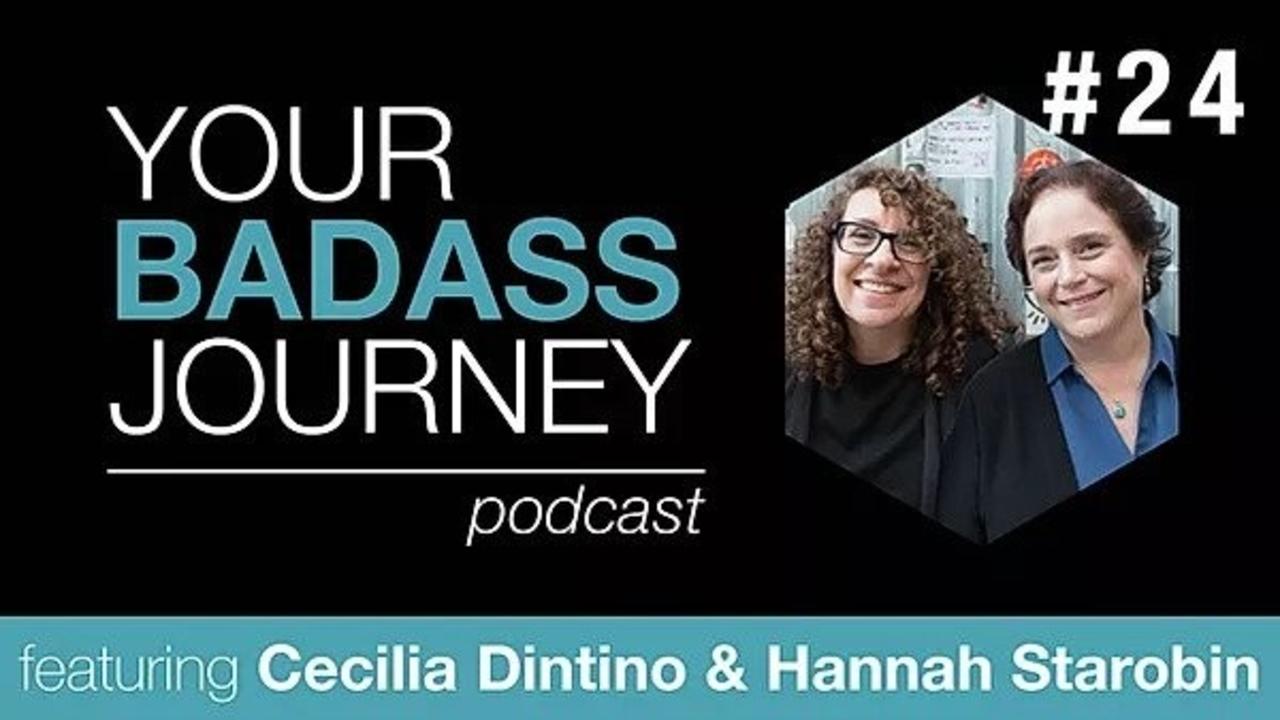 Cecilia Dintino and Hannah Starobin are the badass duo who founded Twisting The Plot, a science-based creative solution for women over 50 that provides practical guidance for understanding one’s life story, dealing with change, and repurposing life. It’s a community and movement for women over 50 who have either had their plots twisted unexpectedly or/and want to twist their plots and make change in their lives.

But before Cecilia and Hannah stories really started to converge, their lives had storied, twisting, and in some ways, parallel plots:

Hannah Starobin is the youngest of three daughters to Pulitzer Prize Winning writer Donald M. Murray and his wife Minnie Mae. Her family was steeped in art, music, and story – weaved in with the usual struggles, humor, and tragedy.

The summer after Hannah graduated high school, her 20-year-old sister Lee died suddenly, leaving her family devastated. Although reeling from the loss, Hannah threw herself into school and quickly found an outlet for her passion and creativity in the theater.

In 1991, Hannah left the theater to be a full-time Mom to her wonderful sons Joshua and Sam but once they were settled in school she found a desire to see her story unfold in a new way. Hannah began volunteering at The Other Place in Manhattan, a program for homeless mentally ill adults, and instantly felt at home. She found a place where she could use her creativity, curiosity and stage managing skills, but Hannah soon realized that she needed a clinical education to understand how to make a difference in the lives of the clients.

Upon graduating with a Masters in Social Work from Fordham University, she began working at New York Presbyterian Hospital on a specialized unit treating people with psychotic disorders. While at NYPH, Hannah used her unique combination of clinical skills and creativity to develop a protocol for helping patients with severe thought disorders communicate.

Hannah’s story continued to unfold in 2015, as she faced physical changes, an empty nest, and a sense that life was shifting. Hannah found herself longing to talk to her parents; Had they dreaded the quiet? Were they excited about a new beginning? Then she remembered a piece her Dad wrote for the Boston Globe titled “Life with Hannah’s Rubber Tree” about her move to New York City and his own thoughts about facing the empty nest. Hannah began to re-read all twenty years of her Dad’s observations on aging.

At the same time, Dr. Cecilia Dintino was on her own journey. For over 28 years, she has worked with clients using science-based methods and creative approaches to foster awareness, inspire change, and deepen connection with self and others. She is an Assistant Clinical Professor of Psychology at Columbia University Medical Center and faculty at New York University’s Graduate Program in Drama Therapy.

Cecilia’s work with clients has pushed her to keep growing and evolving herself. “A change agent has to be one who can change,” She reminds herself regularly.

Then Cecilia also found herself, seemingly suddenly, a women in her 50s. Her body had changed, and the concrete notion of impermanence became something hard to ignore. Looking to the experts for answers and tools, she noticed the maps and guiding direction for growth at this stage of life were less obvious. Actually there were none. She started talking to her friends and colleagues over 50, and lo and behold, nobody had a map and everyone was uncertain about next steps.

Cecilia and Hannah were lamenting the state of middle-age mystery when Hannah suggested that they look at the situation differently. “If there is no map, then we are free to make one up,” she said.

So they both decided to get even more creative and innovate new ways of being and thinking for women of a certain age. They began to read, to research, and to write – and Twisting The Plot: Solutions for Women Over 50 was born.

“The reality of being over 50 is facing, as we say, plot twists that happened to you, that may not be of your own choice, as well as the ones you choose,” Hannah says.

And one of the most difficult plot twists is that people lose their community, their tribe. They lose that support system that they've had in place, whether it is through their children, through the ending of a relationship, or through a job. These women are looking, they're lonely, they're isolated, and that makes them feel more vulnerable to all of the thoughts that we all have.

So, Cecilia and Hannah see this as an opportunity to bring women together to support each other and to see that we are still vital and that we are an untapped resource that can make enormous change.

If you’re over 50 and you’re ready to become the next version of you, head over to http://www.twistingtheplot.com.